If you didn’t notice, I haven’t posted much in a while. Perhaps it’s due to distraction or laziness, but also because like any red-blooded American twenty-something, I’ve been mooching off of my parents’ various cable subscriptions and marathoning old HBO shows. (Seriously, I think Oz changed my life. I’ll have to write about that one sometime.) …That and I renewed my WOW subscription. Anywhoo, I’ve been fortunate enough to stay active with the newest installment of everyone’s favorite Freudian fanfare, American Horror Story: Freakshow.

I’ve been a fan of this series since the get-go, and yes, I accept it’s flaws as much as I bitch about them with friends and co-workers and anyone else who will listen. If anything, I always follow each season ’til the end, even Coven. So I decided to write a bit about each – the good, the bad, the freaky, and the just plain awful. Spoilers ahoy! (Mostly pertaining to Freak Show!) I’m not gonna give any real plot synopsis, but overall if you haven’t seen it, watch it dammit – all but the latest seasons are on Netflix.

American Horror Story: making families shift uncomfortably in their seats since 2011. This was the beginning of something new and exciting, with an opening that dares you not to look away (not at all unlike that of Se7en‘s). 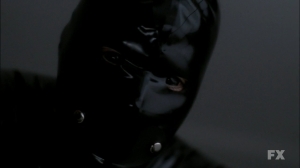 “Bring out the gimp.”

Granted, I haven’t seen this since it’s airing (or any of the other seasons), but needless to say, some things just stick with you. Being that this was a season of firsts, Murder House took some serious balls – we’re talking rape, S&M nightmares, school shootings, and straight-up child abuse. And this is on cable. 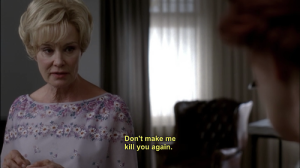 Now, it’s one thing to have shock factor, but fortunately we have a pretty gripping story to go along with.

That, and a new generation has fallen for Our Lady of Perpetual Ferocity, Jessica Lange.

I believe it was Entertainment Weekly that described Lange’s portrayal of Constance Langdon as “Southern Comfort with a hint of venom.” Lange would later prove that she can keep this balance consistent throughout the seasons, weighing each outrage with vulnerability.

In retrospect, Murder House was probably the most solid of the seasons, and one of my favorites. Next to Asylum.


Though Asylum polarized audiences, I believe this one is my favorite: it has a cohesive plot, exciting characters and just enough weirdness and camp. That, and I think that Dr. Thredson (Zachary Quinto) was probably, arguably, the scariest AHS villain to date (which I will happily defend).

I only have three gripes: lame zombie reveal (though Nazi experiments is a new angle), disappointing deaths of not one, but two amazing characters (granted, they were heavily linked), and the serial killer’s name was “Bloody Face.”

Yeah, I’ve got nothing.

Some people hated the aliens, but I really didn’t mind them. I was just glad to see something different. Oh, and bravo James Cromwell – in only one scene, you destroyed my childhood memories of the kindly farmer who sang to a pig. Thank you. 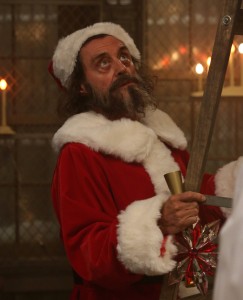 I also have some soft spots for asylums and Ed Gein types – that kind of horror feels, I dunno, nostalgic? Yeah, that’s the best way to describe it. So I guess that’s another perk of following AHS – if you don’t like one kind of scary, another’s just around the corner!

By Asylum, I caught on to some tropes, reoccuring cast members aside:

Now that I think of it, this series might as well have been called Mommy Issues: Seriously, Call Your Mom. When it came to Asylum, I’m not sure which was more scarring: watching Sarah Paulson’s DIY abortion, or the fact that Lana Winters’ exposé on Briarcliff was practically a recreation of one of the most abhorring and infamous scandals in the history of Staten Island.

I wanted Coven to be good, sincerely.

It had so many chances to do something well, but it went wrong at every turn:

Also make sure your leading character has the personality and mental acuity of a goldfish.

This is just the tip of the iceberg. I think Buzzfeed also made a nice list of everything wrong. (Also I stand corrected on one of my tropes – I think the murderous rape-baby stops here.)

Also is it weird that there was more racism in Coven (presumably modern day, mind you) than there was during the 1950s (i.e. Freak Show)? Speaking of which, moving on-

This is my favorite opening. Maybe I just like toy pianos.

Sideshows/freak shows have also always appealed to me. Again, just one of those weird things. Plus this season was filled with ’50’s kitsch and David Bowie – pretty much everything I love right there. Not to mention numerous references to Tod Browning’s Freaks, one of my favorites, but we’ll get to that later. Oh, and awesome job with that Elephant Man theme near the end!

On the whole, I enjoyed this season a lot. Even though there wasn’t really an overarching storyline, I felt that it worked well as a character study/spectacle piece. Though, honestly, I still find it troublesome that there was so much focus on the music videos (at least until it was realized that the show needed to progress).

At first, it made sense: it was Elsa’s show and she’s a singer. That’s obvious. Now the twins come in and they need to be special – they better sing too. And now we’ve got Jimmy all angsty so he’s headlining with Nirvana? I mean, I know they’re pushing for more Evan Peters (especially because he mostly just got drunk and sulked all the time halfway through), but that was really, really pointless.

Oh and speaking of pointless, what was the point of talking about Stanley’s big wiener if they’re never going to do anything with it? I’m sorry, but I was at least hoping it would be chopped off and put on display at that Morbidity Museum – which would be wonderfully ironic – of course, not that they’d show it, but it’s the principle of the damn thing.

Needless to say, I feel that Stanley’s demise (a là Freaks) was satisfying, but the end of the show was so rushed, they never brought him up again or did anything with him – kind of like how they never mentioned if the Lizard Girl’s dad even survived the tar-and-feathering (or if there were repercussions). I guess someone remembered that we couldn’t just be distracted by jingle keys any longer and the show actually had to be finished.

This brings me to Dandy. 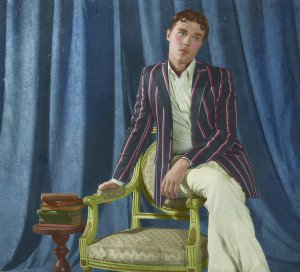 If ever there was a character you could love to hate, it was this kid. I could seriously not look away. This was the epitome of villainy: a spoiled, rich brat who makes Kanye West look humble. He also progressed the most throughout this show, which made his ending so…disappointing. Especially after seeing what they did to Stanley – why not make Dandy’s death ironic, at the very least? The water trap was too easy. Easy and boring. There, I said it.

I really wanted to see them doing more stuff, you know?

There was still plenty to enjoy: Sarah Paulson does a fantastic job as Bette and Dot Tattler, and they brought back Kathy Bates and Angela Bassett – plus we now have TV debuts of the likes of Mat Fraser, Erika Ervin and Rose Siggins. Like I mentioned before, Freak Show mostly served as a spectacle of characters, which was still fun to watch.

For now, it is still up in the air as to whether or not this was  Jessica Lange’s last season. At first it was believed to be, but since that rumor, creator Ryan Murphy has been begging her to stay. Believing that Freak Show was her last, it makes the last episode, rather her last performance (more Bowie – yay!), to be particularly heartbreaking. Not as heartbreaking as “Orphans” though. That was like…jeeze.

Personally, I hope she stays.