Much like his predecessors Bale and Fassbender, the transformation is impressive.

Within the first minute of Dallas Buyers Club, we learn everything we need to know about Ron Woodroof (McConaughey)- he’s a womanizing, rodeo loving, gay-bashing, machismo hustler son of a bitch. And thanks to casual referential conversation, we also know right away that AIDs has only recently made its way into social consciousness as an epidemic- and that it’s a disease only for dem queerosexuals.

Wouldn’t you know it, not to long after learning about AIDs, Ron finds out he’s HIV-positive after a routine blood test. Faced with only 30 days to live Ron fights his way through drug trials and decides to take matters into his own hands, fighting Big Pharma and the FDA for his and others’ right to live, thus beginning the Dallas Buyers Club.

Based on a true story of tenacity and survival, I think one of the key focuses of this film is transformation. This is an account of a man who went from being a simple hustler to someone who challenged an untouchable industry. Was he still a hustler? Well, yes, but he was still trying to help people. In the process, he eventually changed his homophobic ways (slowly and unceremoniously) and  befriended a lovely trans-lady named Raylon (Leto). Of course, this isn’t really a Cinderella story or anything – there’s plenty of heartbreak and ostracism met along the way, all thanks to good ol’ fashioned ignorance, prejudice and human flaws.

Willem would be proud.

There’s been a lot of buzz around McConaughey and Leto’s performances – for instance, #Oscar4JaredLeto is doing its damnedest to trend right now. However, like those doctors who need more “Likes” to cure a dying child, I really don’t think the Academy cares about hashtags, but whatever, good luck with that.

Anywhoo, I think it’s fair to say that the buzz is kind of worth it. Personally, I’ve really been digging Matthew McConaughey’s performances lately, and he does not fail to satisfy in this role. Additionally, I would have loved to see more of Raylon’s side of things and have her be less of a punching bag – alas, this was not her story.

To sum things up, Dallas Buyers Club is a great story of vulnerability, ferocity, and ultimately triumph. The performances are worth the viewing alone – considering they carry the whole movie – even if the villains are dreadfully callous and one-sided. Oh well, nobody’s perfect.

I’ll admit, at first I was hesitant about writing about this one. I’ve been wanting to see this film ever since I heard of it…namely because McQueen and Fassbender teamed up again for another fascinating account of the human condition. But then the reviews poured in, and between the pros and my peers I felt uneasy about tackling such a buzz-worthy feature. Is this the film of the decade or just the same song and dance about the abhorred evils of humanity? Well, I guess a little column A, a little column B. Okay, maybe more of column B.

Based on a true story, Solomon Northup (Chiwetel Ejiofor) is a free man of Saratoga Springs – a loving wife, two children, and a skilled violinist and carpenter. One night whilst socializing in Washington, DC, Northup is drugged, kidnapped and sold into slavery as a Georgian runaway. With him we experience the five stages of grief as Northup chooses between survival and living.

As always, Steve McQueen delivers a cinematically emotional powerhouse – this time fueled by the trifecta of a strong story, a score by Hans Zimmer, and cinematography that perfectly captures an essence of desperation and isolation. Not to mention, this cast is incredible! Now, if only the characters were a bit more dimensional.

First of all, despite the title, it definitely didn’t feel like Northup was enslaved for twelve years.

Additionally, I felt as if I was a bit far removed from our protagonist, only because he did very little as a character. Yes, he was surviving, but the film fails to let us better empathize with his woes because he seemed to have little contact with his peers. Or at least, that’s all we as the audience gets to see. Conversation within the film would allow a better grasp at Northup’s turmoil and thought process, as well as to how he adapted to life as a slave. In turn, there would be a much stronger implication of character transformation.

Is it just me, or does Paul Dano get the crap beat out of him in every movie?

Upon reading a bit about the real Solomon Northup, we’re dealing with a man that had survived far more cruelties than the film’s Northup did – including but not limited to overseeing and punishing fellow slaves (not just the one instance in the film – even then Fassbender took over). By no means am I commending utter cruelty – as if the scene wasn’t hard enough to watch already – I just feel as if this portrayal did not give the man the praise and admiration that he deserves for overcoming such adversity.

Perhaps this change in adaptation was made out of fear of villainizing our protagonist. If so, that’s an incredibly safe decision, considering that this kind of emotional struggle would be met every day. More so, the addition of such happenings would cause an interesting paradigm shift of sorts, leading to more profound character development. Granted, a point was made early of how Northup refuses to drown in his misfortune, but that doesn’t mean he isn’t human. Not even the supporting cast can move past one dimension: Cumberbatch is a flakey landowner, Fassbender and Paulsen are evil and Brad Pitt’s the friendly Canadian. No surprises here.

After all this griping, I still believe that 12 Years A Slave is a beautiful film worth seeing. Now if only there was more substance to the piece, now that would be something worth buzzing about.

This is the Way the World Ends

Personally, I feel as if cult classic Donnie Darko has received more than enough recognition as that, a cult classic. Not that it doesn’t deserve it. However, I feel that its all-grown-up cousin film Southland Tales deserves similar cult status. Much like Darko, we’re dealing with the time paradoxes and end of the world – only this time with sex, drugs, and government conspiracies.

After twin nuclear attacks in Texas in 2005, the country has fallen into disarray, and World War III has begun. Our story focuses on three men: an actor, Boxer Santaros (Dwayne Johnson) and identical twins Roland and Ronald Taverner (Sean William Scott) and their collision between government agencies, neo-Marxist groups, and a new energy source known as Fluid Karma – thanks to an ex-porn star called Krysta Now (Sarah Michelle Gellar). Confused? That’s okay, because we have reciting vet Justin Timberlake to talk us through everything by means of allegory. 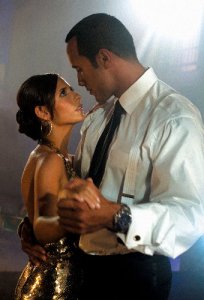 “Scientists are saying the future is going to be far more futuristic than they originally predicted.”

It’s understandable that a film like this can easily fly over a person’s head. It even took me a couple of watches just to get the full picture. This does not mean that I wasn’t the least bit entertained. The performances are earnest as well as over-the-top, creating caricatures of everyday media icons while simultaneously mocking the infotainment industry of our time. On the other hand, some of the situations and dialogue are just too ludicrous – but that’s okay! We’re given a reality that allows us to accept these things. I mean, we’re dealing with the end of the world here – I think a little suspension of disbelief is not too much to ask.

As mentioned, there is a massive ensemble of actors in this picture, and about twice as many cameos – many are beloved SNL alumni. Even Frank the Bunny makes a couple appearances. Additionally, these performances are equally matched by fantastic videography and a score by Moby, creating a most electric atmosphere for this confusion and chaos.

Southland Tales did not receive much recognition…or positive reviews for that matter, but I believe that there’s some sort of oddball charm to this feature. It may not capture the youthful, withdrawn nature of Donnie Darko, but it also doesn’t deserve to be held back by such a comparison. A genuine sci-fi for our time, complete with Orwellian undertones, Southland Tales is a cult classic waiting to happen. Just sit back, relax, and enjoy the ride.

Posted in Drinking the Kool-aid, Feature